Updated with:  1.  message from Ros Grypari

Thank you citizens of the world, from Syntagma square, Athens

A MESSAGE FOR ALL NON-GREEKS… from Ros Grypari

Although I am not Greek, I love Greece dearly and it has been my second home for nearly 40 years. Over the last two years I have watched a lot of finger pointing and accusations being aimed at this unequaled, beautiful cradle of democracy and I have one question for you: How would your county’s people have coped, if your nation’s history had followed the same path that Greek history has followed?…

Ironically, the Greeks, the creators of democracy, have only been a FREE, «democratic» nation for a mere 38 years, since their infamous junta fell in 1974! Think about it! For over 600 years the Greeks have not had any leaders that they could trust!… They were under a violent and barbaric Turkish rule for 400 years! The only way to survive was by bribery and corruption! Vastly outnumbered, they fought with unparalleled bravery from 1821 to 1829 to overthrow the Turks and they eventually won – but then – in 1831, the three great powers of Europe (Great Britain, France and Russia) decided that the newly independent Greeks should have a monarchy, so they sent them a 17 year old Bavarian/German prince to be their king, accompanied by 3 very austere Bavarian/German advisors! (Sound familiar?)… From 1863, thereon, the Greek monarchy came from Denmark. The foreign imposed monarchy was finally overthrown, after 153 years, by the military junta in 1967, after which the Greeks suffered a further 7 years of terror at the hands of the generals! The monarchy’s permanent removal was, unsurprisingly, decided in a referendum by the Greek people in 1974.

Apart from the Turkish rule, the foreign imposed monarchies and a dictatorship, the Greeks also suffered terribly during the German and Italian occupation during WWII, which left them deeply in debt, devastated and destroyed, in spite of their courageous resistance. Once again, the Greeks had an immense struggle, being forced to use whatever means it took, just to survive!… Is it a wonder that they are sick of foreigners interfering with their affairs? What other nation in the developed world has been so oppressed, by so many other nations AND a military junta (which was ALSO imposed by a foreign power!) for the last 600 years?

Understandably, ever since 1974, when «democracy» was finally restored, the Greek people have nurtured a deep mistrust of all their politicians and leaders. Greek citizens rarely get the advantage of tax breaks and rewards for being honest that one expects in a civilized, democratic society. Greek politicians, having been tarred with the same corrupt brush as their tyrannical predecessors, have always stolen from their people and used bribery and blackmail to get them to vote for them! Avoiding paying taxes has, largely, been an unspoken agreement between the RICH Greeks and the politicians, who had a mutual, unspoken agreement to turn a blind eye! But the rich and the politicians are NOT the ones who are paying the punishment for the mess that they have got Greece into! It is the poor, the pensioners and the middle classes who are being forced to pay – and they are on their knees! 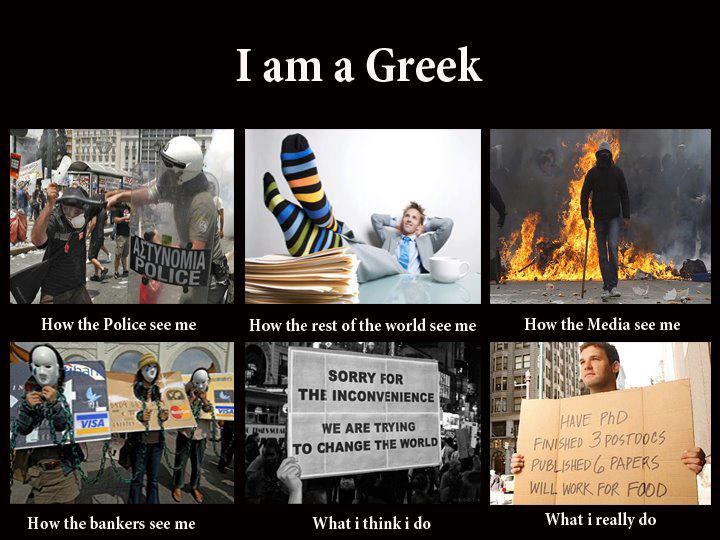 The last nail in the coffin for Greece appears to have been George Papandreou, the most recently elected Greek Prime Minister (whose mother is an American!)… Mr Papandreou was born and raised in the United States, not even coming to Greece until 1974! Following his removal, last year, the Greeks have had yet another leader imposed on them by foreign powers!… A BANKER «technocrat», of all people! (There’s no need to say whose side HE is on!)

This is a watershed moment for Greece. The Greek people are desperately fighting for change and for survival, yet again – but it is a bloody battle and this time they are up against the EU, the IMF, the ECB AND all the world banks! After all, Ancient Athens wasn’t built in a day and modern Athens and Greece will, somehow, have to be re-built out of the ashes, with a new model of honesty, transparency and fairness. The Greeks have a very long and hard road ahead. From where will they find the strength do this on their own, when they have been so defeated and bled so dry? They really can’t take any more pain and unless other countries do something to HELP the Greek people, sooner or later, your own country will be the next victim in the bankers’ sights, in this sinister war of finance! (NB: The majority of the loans that you hear about, that are supposedly going to «help» Greece, are NOT going to the Greek people – they are going to the world’s banks to pay the VAST amounts of interest that have been incurred on the relatively small amount of debt that is owed by Greece!)… It is a country of only 11 million people, so they need a lot of help and support! Capitalism appears to be imploding, worldwide, and it is the Greek people who are paying for it dearly, suffering more than anyone outside of Greece can imagine.

So, to those of you who, mistakenly, think that the Greeks have brought this crisis upon themselves – please think again!… The Greek people are NOT to blame! The combination of hundreds of years of foreign interference/imposition AND the corrupt and greedy bankers, worldwide, are the ones to blame! They have taken advantage of the corrupt government in Greece and have chosen the Greeks as the weakest and easiest victims to prey on for their first meal, using them as an experiment and picking the Greek bones dry in the process!

However, there appears to be a tsunami of support building for the Greeks, which is beginning to spread across the world. It could be the last ray of hope for Greece!Please read the link, below, to read a «Guardian» article, regarding this growing revolution: The Guardian

Nigel Farage has responded to this message!…

Many thanks for your support and encouragement, and good luck with the struggle for democracy where it matters most – in your own neighbourhood!

A remarkable emergence is now taking place, into public view, of the totalitarian intentions of the EU-élite. Until such a peril becomes as apparent as it has now become, there is no stimulus – in countries educated to ignore electoral and constitutional responsibilities – to take an interest in politics; but that stimulus is now painfully present.

All EU-governments have surrendered fiscal competences to the unelected EU-Commission; governments in Greece and Italy have been openly dismissed and replaced with EU-appointees; a Franco-German nexus has seized control of the euro-zone, and the EU’s will-to-power is growing ever more rapidly. It is no longer possible to ignore the dictatorship, which is taking shape, and the necessity of opposing it.

What we need is organisation in every EU-captive nation, and, indeed, in every country around the world, against the power of the Brussels-clique and its supra-nationalist backers elsewhere. Unfortunately, I barely have the resources to arrange such organisation in the UK. Nevertheless, the movement is awakening everywhere, and I hope you will find a way of assisting its advance, where you are.

Fair winds for us Greeks with solidarity around the world today.
Some in our country may be «more Greeks» than others but this is a matter we have to see when we really wake up!
Real thanks to the citizens of the entire world! 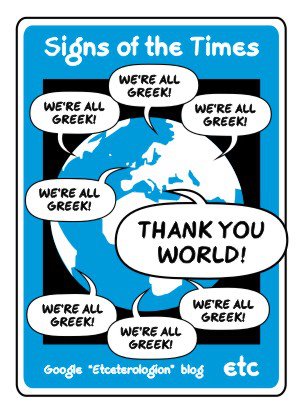